I am starting to see the Turtle light more frequently in my car. As my battery warranty is up soon, if there is an issue with a cell or cells, I would like to have the issue addressed sooner rather than later.

The linked video shows a recent occurrence. What caused me to shoot this video is that I was cruising at a constant 104 km/h with the power meter needle just out of the ECO range (at the border between green and white shading) with the Turtle light on constantly. The battery was nearly full, but had been cold-soaked from the previous night with an overnight low of approximately -20C. Temperatures at the time were -2C. The occurrence was noted approximately 15 minutes into a drive. I shot the video immediately afterward and had to accelerate to induce Turtle.

I ran the battery down to empty and noted a 0.25V difference between highest and lowest cell when sitting still in my driveway. Differences of greater than 0.3V could be produced while driving. There are approximately 6 cells that are showing weakest with #19 consistently low. Cell temperatures by the time the battery was empty ranged from +4 to +11C. 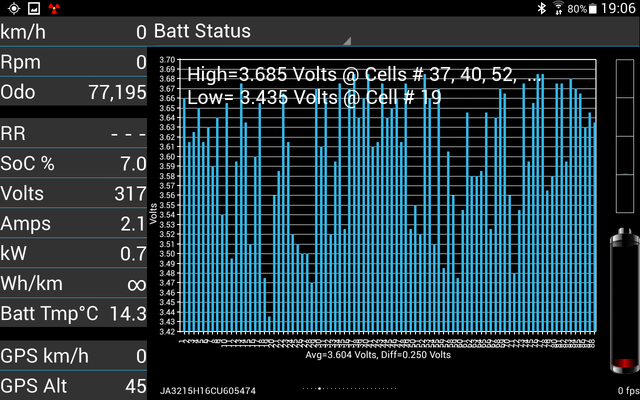 For the experts in this group:

1) Is what I am seeing normal for a cold pack?
2) Do I indeed have weak cells?
3) Has anyone been successful with warranty replacement under these circumstances?

The cell voltage graph shows the root cause of the issue--you have some weak cells in the pack. The quarter volt delta (0.25 or 250mV) is quite a large difference.

Cold pack temperature combined with some weak cells would very likely cause the turtle under acceleration.

Unfortunately this is considered normal wear and tear on the pack, and is not covered under warranty. If a cell were to fail altogether, then it is covered.

If your pack will fully charge to 16 bars, then the weak cells are still working albeit in a degraded capacity. If the pack won't fully charge, then this is a warranty covered fault.

The chain is only as strong as the weakest link; your pack capacity is limited to the strength of the weakest cell. e.g if all the cells were 40Ah except one was degraded to 20Ah, then your performance and range is limited as if the pack were 20Ah. When the weak cell gets depleted then its voltage drops much lower under load than the rest, which triggers the turtle.
kiev = kenny's innovative electric vehicle

I just fixed my (now) yellow and purple pack under the "DanTheMan warranty program." With parts in hand, a fun project.
My battery symptons were very similar to yours.

Dan - You bought your cells from me! Good thing I have a few spares should I need to do the same work as you.

I had another occurrence where I couldn't maintain speed on the highway:

Given that this fault reduces the vehicle to a neighbourhood vehicle for use at below highway speeds, I consider this a warrantable defect. If a gasoline car suffered an engine fault that resulted in a power reduction causing it to not be able to maintain highway speeds, it would be obvious grounds for a warranty repair.

I'll report back once I have word from the dealership.

Turtle Light is coming on in the second video (side-by-side with CaniOn) because of the cells hitting the low-voltage cutoff of 2.8 volts. The car is limiting power to keep the voltage from dropping too low (and what a good job it did).

While low temperature is a factor, increased cell resistance is causing this. I don't remember anything in the warranty waiver I had to sign when purchasing the car relating to internal cell resistance, so you might have an angle there with Mitsubishi if the car is unable to maintain speed.
"Bear" - 2012 Diamond White Pearl ES with QC
"Koorz" - 2012 Cool Silver Metallic ES with QC
"Photon" - 2017 Bolt EV LT in Orange with QC
2018 Tesla Model 3, LR AWD, MSM
Solar-powered since 10/10/2013

PV1 - do you have a copy of the warranty waiver? I bought my car second-hand a couple of years ago.

This may result in a recall of all iMiev traction batteries if they “turtle” while driving and the GOM says the car has range.

This is obviously a safety problem that a number of members have experienced.

In fact, every member who has experienced the issue should report it.
2012 iMIEV ES
2014 Chevy Volt

I would have to file my complaint with Transport Canada as I am in the great white north. From the i-MiEV facebook group, I am certainly not alone with this problem. Others, however, seem to have got the run-around when they have brought their cars to the dealer, because the capacity reported by the car is still decent (mine is showing over 30 Ah) and still gets decent range if driven conservatively.

Adoepner wrote:I would have to file my complaint with Transport Canada as I am in the great white north. From the i-MiEV facebook group, I am certainly not alone with this problem. Others, however, seem to have got the run-around when they have brought their cars to the dealer, because the capacity reported by the car is still decent (mine is showing over 30 Ah) and still gets decent range if driven conservatively.

Let us know how it turns out. A complaint up north could be passed to the US if Canada imposes a recall.
2012 iMIEV ES
2014 Chevy Volt

After a few days, I have my car back from the dealer. They performed a cell “smoothing,” which has helped somewhat, but I can still make turtle appear (I just have to have a heavier foot now). The dealer stated that the smoothing will not be covered by warranty, so I’m on the hook so far for 2 hrs of labour. I plan to document the occurrence of the light after smoothing, again showing the car unable to maintain highway speeds, and then it is going back to the dealer.

I would love to hear from any other MiEV owners in Canada that are experiencing this issue.

Building on the success of the Nissan Leaf Forum started in 2009, the My Electric Car Forums group of websites aims to be your premier destination for EV forums, community, and information.