Buying a used 2011 iMiev from Norway

Buying a used 2011 iMiev from Norway

by Bilych
Hello all! I am interested in purchasing a used 2011 iMiev and getting rid off my diesel hogging SUV. I am based in Ukraine and all the iMievs that are brought in are 99% from Norway. Therefore input from Norwegians would be greatly appreciated. The car has 92K kilometers on the clock, and according to the OBD the Ah reading is 28.5 and the voltages for all 88 cells are from 4.96-4.98 (I don’t have access to Canion so this is the only data). According to the seller the battery charges to all 16 indicators and shows 74 km range this morning at +4-5 celcius. What do you guys think? Will this iMiev last sometime or should I pass on it? Another factor is it seems the odometer has been messed with because in 2017 according to Norwegian records the odometer reading was 117K km. What do you think?

by JoeS
Bilych, welcome to the forum. Yes, getting into electric cars is so nice that most of us will never go back to a diesel or gasoline vehicle again. Obviously, as members of this forum, we consider the i-MiEV/iOn/C-Zero as the vehicle of choice.

Good questions, and let me see if I can tackle them -

1. A battery capacity of 28.5Ah is quite low (it's around 45Ah when new) and would be a disqualifier for me because that seriously affects the car's range. Battery repair and replacement is difficult and almost cost-prohibitive.

2. Yes, I would tend to think the car's mileage is significantly higher than the indicated 92K km.

3. The voltage readings after a full charge should be uniform (within 5 millivolts) around 4.095 volts per cell. Perhaps the readings you were given were a typographical error?

4. A full-charge range of 74km (46 miles) is not necessarily bad or good as it merely reflects how the car had been driven the previous 24 km, although in general it would tend to corroborate the low battery capacity. I would even expect this number to have been lower. Reality is that you would typically expect a usable range of about 60km from this car, IF that Ah reading is correct.

I sympathize with your difficulty in trying to buy a car remotely from another country. I don't know what opportunities you have available, but I'm afraid I personally would not buy this car due to its significantly-reduced range.

Others' opinions are welcomed in an attempt to help Bilych out.

Wishing you all the best!

by Bilych
Hey JoeS! Thanks for the detailed answer I appreciate it. Yes, it’s quite a difficult choice to make as I don’t want to go over a certain budget for the iMiev so I want to find a golden middle. What would you personally recommend when choosing a car, which mAh to look for as a bare minimum in order to get a good 3-4 years run on the car and about 24K km on the odometer? Maybe a certain year and odometer threshold? Thanks

by JoeS
Hi Bilych, I understand your concerns. I personally am not too worried with mileage as a lot depends on how the car was driven and how the battery was cared for; however, with an older i-MiEV there are three concerns -

1. Rust, if the car was exposed to salt on winter roads - I personally have no experience with this topic.
2. Battery capacity - can be measured with an app (such as CaniOn on Android and a number of other apps discussed on this forum) and bluetooth genuine OBDLink LX or MX OBDII adapter, or else with a Mitsubishi MUT3 diagnostic. To last you for the next four years I would look for a car with >35Ah but I suspect all the pre-2012 cars you are looking at will have a lower capacity. Perhaps others with pre-2012 experience can comment on the relationship between age and mileage and capacity? We have a number of threads on this topic; e.g., http://myimiev.com/forum/viewtopic.php?f=23&t=4014
3. On-Board Charger / dc-dc module. Unfortunately, there is no way of predicting if and when this module will fail. Its replacement cost is prohibitive but some forum members have been successful in repairing this module and we have a very detailed thread on this topic which is a worldwide technical collaborative effort. Most cars have at least one Achilles' Heel, and this is the i-MiEV's. As far as I know there is no way of predicting the imminence of its demise.

Did I understand you correctly that you're only planning on putting on 24K km in the next four years or is that 24K km per year?

Hope others can jump in with some some words of encouragement.

That battery is not long for this world and I'd be very surprised if there weren't some individual faulty cells dragging it down so low at that mileage. That's the lowest capacity I've seen reported online so far.

Mine has done almost the same mileage and is currently at around 34Ah, and that was after I've just replaced a few faulty cells that were dragging it down even lower.

Walk away. You can do much better. Look for one that is lower mileage, also avoid 2011 and 2012 cars as they use the older LEV50 cells which degrade a lot faster than the later LEV50N cells used from late 2012 onward.

If I knew what I know now I would not have bought a 2011 model due to the older cell type and it is already coming back to bite me two years later as I do a high yearly mileage. (30k miles in 2 1/2 years)

by Bilych
Hey guys I have a screen from the seller of the car. Here are the stats, can anyone comment on the condition of the battery? Thanks! 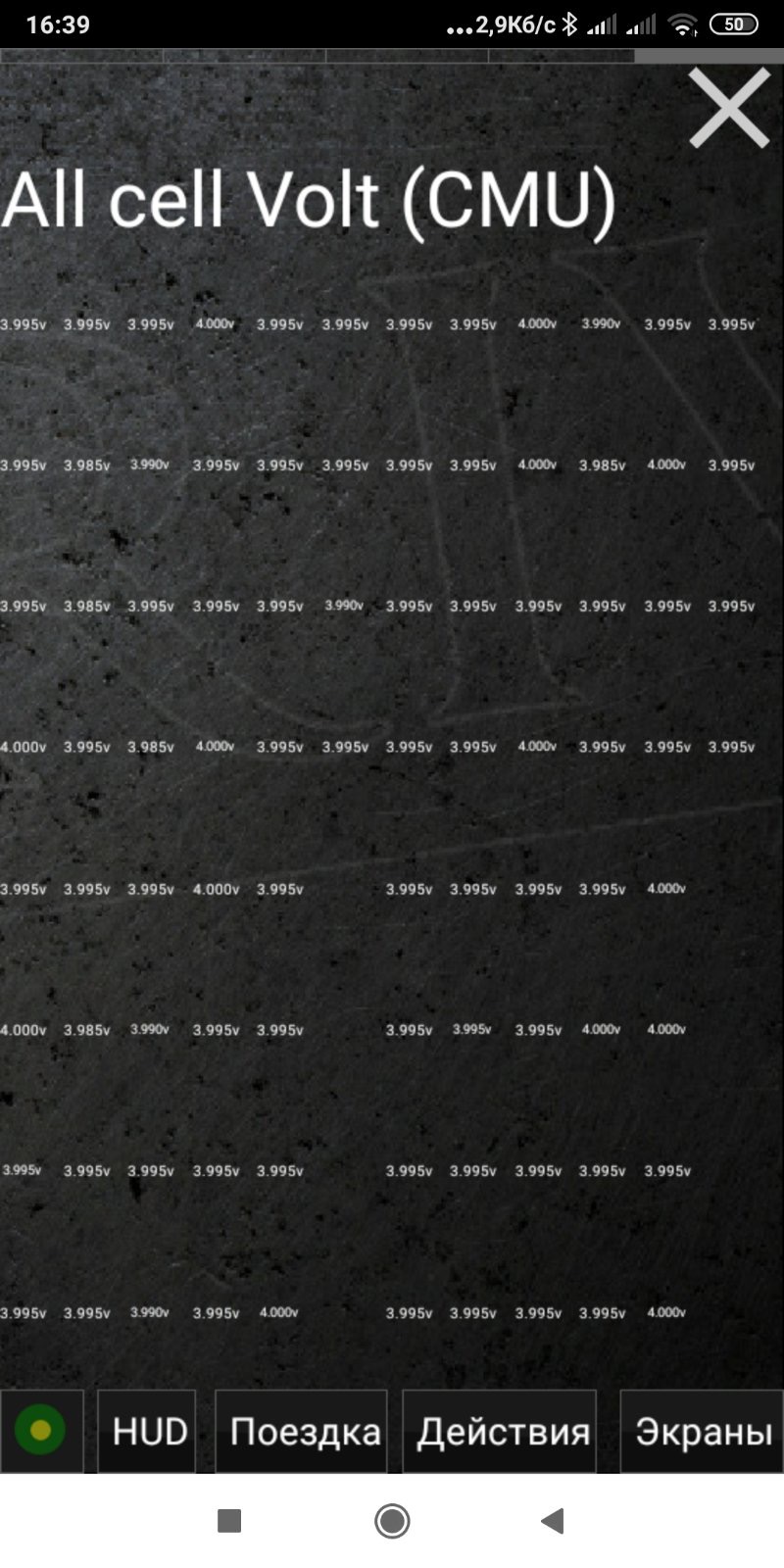 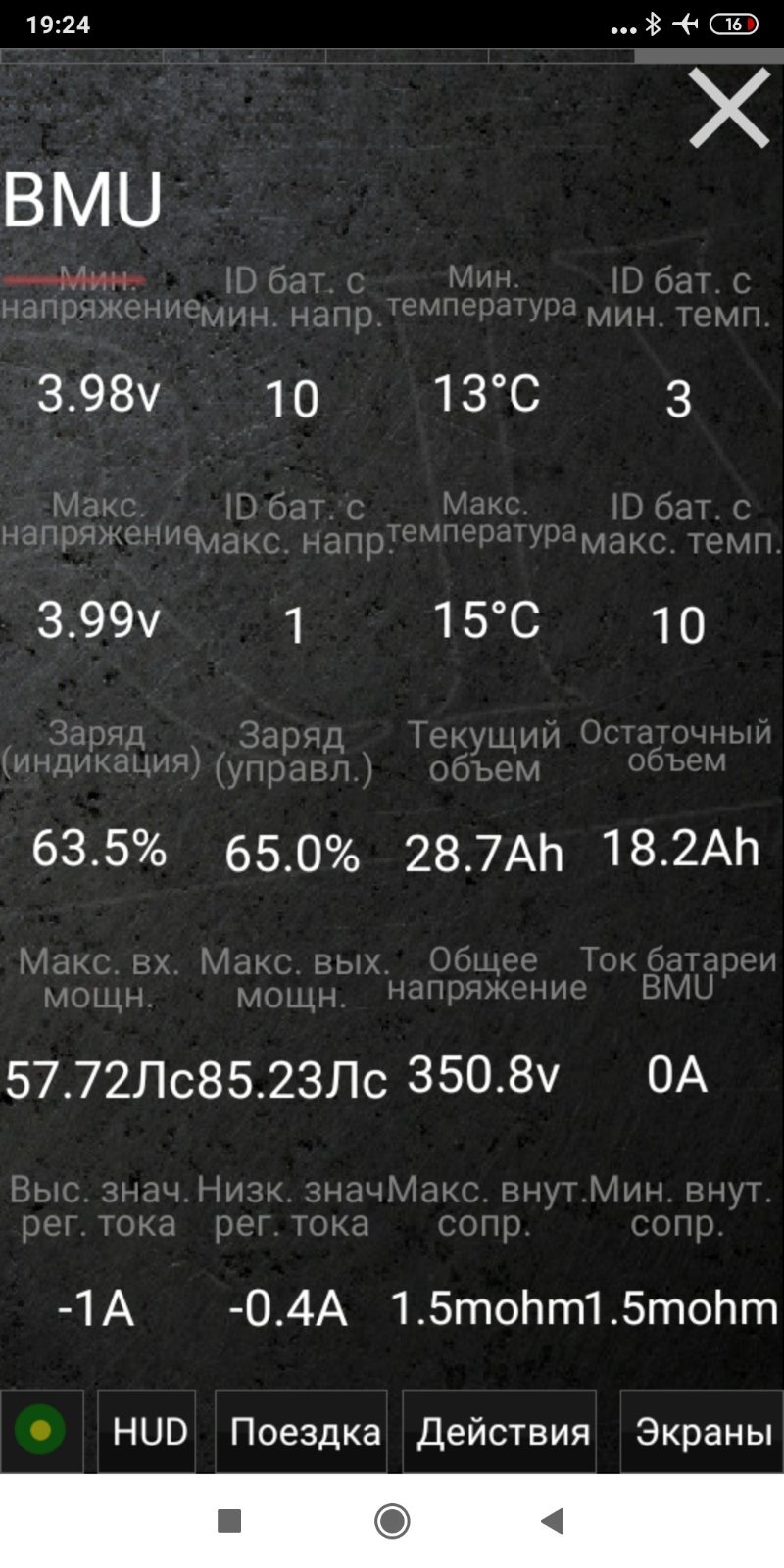 by kiev
The first screen is showing good balance across all the cells with only a 15 mV difference between the max and min cells. Most are at 3.995, but there were a couple at 4.000 and a couple at 3.985. The pack total voltage would be the sum of each of these values, ~350 V, and it's shown on the second screen.

the second screen is a summary of the min/max voltage and temperature, all good. It is also showing that the state of charge of the pack is only about 65%, so the "fuel" gauge on the dash would be at about 9 or 10 bars.

Fully charged would show 16 bars and the cells would be near 4.100 and the total pack voltage close to 360 V.

The value for the internal resistance of the cells, 1.5 mOhms, is good.

Depending upon how far you need to commute, this could be a useful car. e.g. 60-70 km round trip

by Bilych
Hey kiev! I appreciate the detailed answer. I looked over another vehicle today and I have some stats to share. 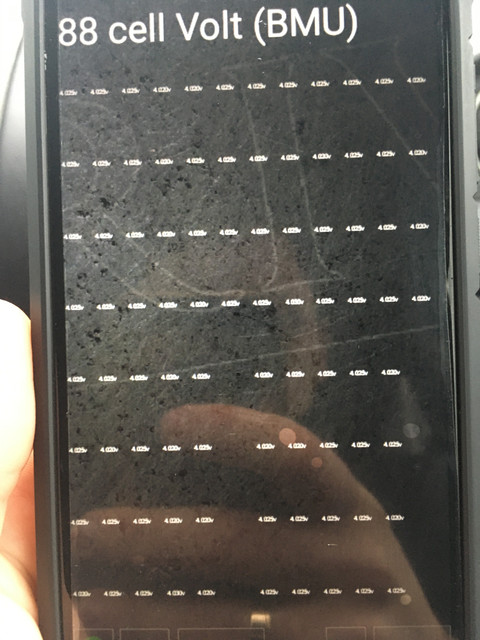 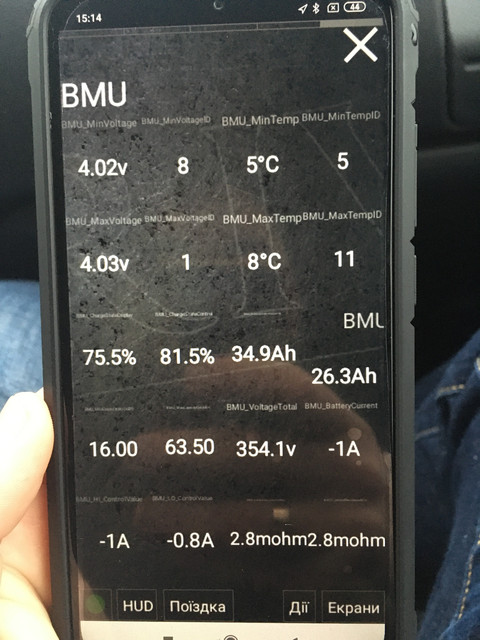 by Don
Much better! - That one has almost as much energy with a 75% charge as the first one has with a full charge

by kiev
This second car cell data all looks good, in addition it has a stronger pack with a capacity of 34.9 Ah, and will have a longer driving range of about 75-85 km.

It has 75% of it's maximum available energy in the tank, so showing about 12 bars on the fuel gauge.

The internal resistance of 2.8 mOhms is good and shows slightly higher than the first car due to the colder temperature.
All times are UTC-07:00
Page 1 of 3
Powered by phpBB® Forum Software © phpBB Limited
https://www.phpbb.com/