ZAPPED wrote:...I think we will see a EV sports car built on the i chassis.... In line with this thread's topic:

Can you imagine being a suspension engineer for Mitsubishi and telling management that they need to put in some seriously-skinny non-standard front tires on this vehicle? It must have taken some pretty compelling arguments (handling? rolling resistance?), but the net result works well, IMO. Converting to four identical fatter tires may result in 'unintended consequences' (and I don't mean the 'obvious' reduced range).

Sorry, after a year of driving the iMiEV, I now don't buy into the understeer allegation with the stock tires in place.

First of all, with the overly-sensitive (in my opinion) ASC (Active Stability Control), it is all but impossible to get anywhere close to the adhesion limits of this car - it just starts auto-correcting. Best example to demonstrate this is to have your foot off the accelerator in 'B' on a sweeping downhill curve with a rumpled road surface while traveling fairly fast - what happens is the car suddenly both releases regen (which I personally really don't like) and starts selectively applying the brakes. You can't detect understeer nor oversteer as the car doesn't let you get there.

Now, turn off ASC and do the same thing. In my opinion the balance is neutral with neither understeer plowing nor oversteer aft end swinging out.

For me driving daily on my twisty curvy roads, the car is simply a joy to fling around the corners (much to my wife's dismay). I would hope some of our Forum members would enter the iMiEV in some autocross/gymkhana competitions to demonstrate this. That centered and low-down battery pack contributes to the car's stability, with its low polar moment of inertia allowing it to easily twitch through S-curves while accelerating hard. The statements by certain car reviewers that the car "feels tippy" are sheer nonsense unsupported by the facts, which a static stability test would quickly quantify and hopefully disprove.

JoeS wrote:Can you imagine being a suspension engineer for Mitsubishi and telling management that they need to put in some seriously-skinny non-standard front tires on this vehicle? It must have taken some pretty compelling arguments (handling? rolling resistance?)

They had some very compelling arguments, so I'm sure it was a pretty easy 'sell'. I doubt rolling resistance was even discussed, but it was surely done in an effort to make the car handle the city environment it was designed for, no doubt about it. Much like a modern Porsche, it really needed the larger rear tires just to keep the rear end behind the front end

Remember, this was all designed for a car a foot shorter, 3 inches narrower, nearly 700 pounds lighter and extremely rear weight biased compared to our iMiEV . . . . and it had half the power. Truly a 'city car' designed neither for speed or handling

Drivetrain
The i has a "rear-midship" engine mounted just ahead of the rear axle, a highly unusual configuration in a small car where front-engine design has dominated since the 1970s. The 3B20 three-cylinder powerplant has an aluminium cylinder block, a displacement of 659 cubic centimetres, and incorporates double overhead camshafts with MIVEC variable valve timing in the cylinder head. Initially only an intercooled and turbocharged engine was offered, until a naturally aspirated version was introduced for 2007.

Suspension, brakes and tires
MacPherson struts are used in the front suspension, and an unusual three-link De Dion tube/Watt's linkage is used in the rear. Front discs with anti-lock braking (ABS) and electronic brakeforce distribution (EBD) are standard across the range. In common with many other mid- or rear-engined vehicles its fifteen-inch wheels have uneven-sized tires, 145/65 on the fronts and wider 175/55 on the rears, in an effort to minimize the chances of oversteer caused by the rear-biased weight distribution.

For the underpowered Tokyo city car it was designed for (which probably seldom saw 50mph) the minimal suspension made pretty good sense. For a larger, heavier EV cruising down the PCH at 65 mph, not so much

Now . . . . . Can you imagine being a suspension engineer for Mitsubishi and recommending that they keep this exact same set-up in a completely new car which is larger, wider, heavier, has a much closer to 50/50 weight distribution and more than twice the engine torque?? (The standard I car had 42 ft/lb, the turbo had 65 and our iMiEV has 133). If any suspension engineer thought this was a good idea, I'm pretty sure he would have lost his job before the sun went down! But, seriously, I doubt any Mitsubishi suspension engineer had any hand in this - I suspect it came directly from management as a cost cutting measure. "We'll stick an electronic ASC system on it (that the original car didn't have) which won't let it understeer quite as badly as it does without it, and hopefully nobody will notice that the suspension was designed for a completely different car"

I'm pretty shocked (and really disappointed) that it seems like they just took an existing automobile and converted it into an EV with so little thought as to what they were changing. Size, weight, C/G, F/R bias and power. The iMiEV is so much different in so many ways, yet they didn't make ANY changes to the suspension. How much more would it have cost to properly set up the now 2600 pound EV? Surely much less than it cost to completely redesign the body to add a foot of length and a few inches to the width just for the North American market. I'm all for keeping costs down, but this borders on the ridiculous, IMO

peterdambier wrote:I guess the understeering can be helped. There is a switch to get rid of the nurse who controls the breaks and thrust......

Really?
Where is that switch?

peterdambier wrote:There is a switch to get rid of the nurse who controls the breaks and thrust......

Where is that switch?

Low on the dashboard on the left of the steering column (I believe). I think it's near the small handle that opens the L1/L2 charging door. It might have the icon of a skidding car on it. My car is parked 42 floors below in our parking garage, so it's not simply a matter of my walking a short distance to my garage to take a quick look, but you should be able to find this switch if you kneel down with the driver's door open and look at the lower dashboard area.
Aloha,
Art
Honolulu: 2014 BMW i3 BEV (formerly 2012 i-MiEV SE)
Uppsala, Sweden: 2000 Honda Insight

on a RHD car it is in the small group of controls that alter the headlight height and the mirror adjustment - between the steering column and the door - where the number 12 is on this diagram: 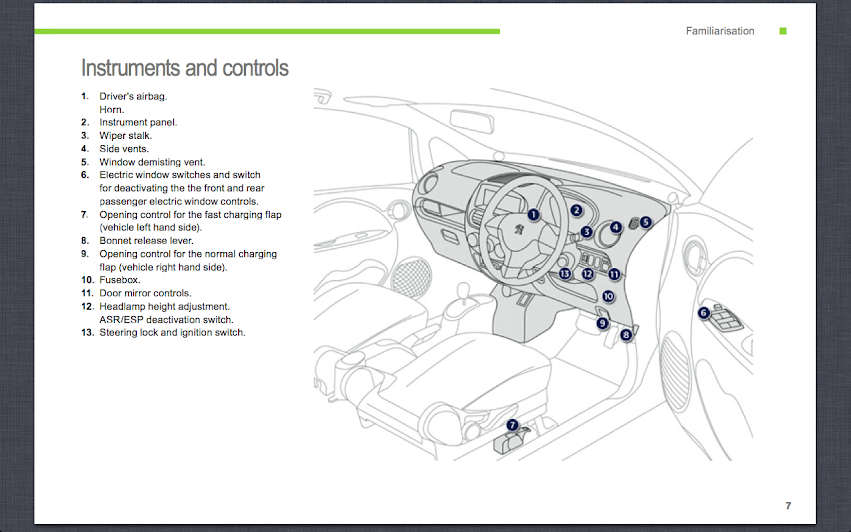 Maybe a LHD car is just a mirror image of this layout?
Keith B.
driving with the power of 15.667 kettles

Oddly, our 'Bonnet Release Lever' is in the same exact place as it is in your car - Over on the far right, even though all the rest of the controls were moved to the left

Thanks Bleepy and Art.

, but for certain conditions such as an ice driveway where you might be able to muddle your way out of or up a slight slope if you disabled that feature that's being a bit too clever for its own good?

Did I get that right?

I think you did - my 1st Prius got stuck on a waterlogged field because the traction control could not be disabled. I'm sure if I'd been able to spin the wheels it would have started moving. Luckily there was a tractor on hand to tow it out.
Keith B.
driving with the power of 15.667 kettles

ADMIN, got another one ^.

There's no way Mitsubishi would say that button is for "sport". If it was, they would have a sport mode. They're lawyered up pretty well, as evidenced by some of the warnings in the owner's manual. For one, don't shift into neutral while driving because you lose throttle input, not because it may cause damage to the car.

Turning off ASC in snow is fun, though. I needed to turn it off the other day to make it up my brother's driveway.